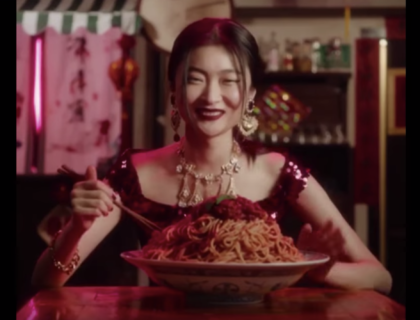 Following the loud scandal that turned most of Asia and many fashion lovers worldwide against Dolce & Gabbana, one can’t help but think how long it took the fashion industry to acknowledge and react to racism instead of letting it slide as another “artistic vision.”

It all began after Dolce & Gabbana aired an advertisement campaign in late November of last year. It featured a Chinese model fully dressed in couture D&G. At first, this might sound like the famous Italian fashion house chose to take steps towards cultural diversity in their campaigns – if not for its blatantly racist message.

In the clips posted to the fashion house’s Instagram, the model giggles as she tries to use chopsticks to eat a pizza, a large cannoli, and spaghetti. Diet Prada, an Instagram account dedicated to bringing light to brand issues, immediately caught onto the offensive elements and published it to its 1 million followers. The account took offense with the “over-the-top embellishment, cliché ambient music, comical pronunciations of foreign names/words and Chinese subtitles” in the videos.

The account also translated the Chinese subtitles in the videos to English – which reveals the male narrator’s mocking statements.

Diet Prada summed up the whole campaign really well in one statement: “It attempts to target China, but instead mocks them with a parodied vision of what modern China is not … a gag for amusement.”

After calling attention to the campaign, hundreds of thousands of people have expressed their disappointment in the brand, including many celebrities and social media influencers. Chinese Singer-actor Wang Junkai even announced that he and his office have broken off any previous engagement with Dolce & Gabbana.

Consequently, the greatly anticipated D&G show in Shanghai was cancelled, and many D&G shops across China have closed. As a result, the value of the company’s stock plummeted.

But things got even worse.

An alleged screenshot of an Instagram conversation between D&G co-founder Stefano Gabbana and a friend was leaked. In it, Stefano makes insults about China, like “China Ignorant Dirty Smelling Mafia”.

To save the house, Domenico Dolce and Stefano Gabbana released a statement, expressing their apologies for the incident, and claiming that they have great respect for Chinese culture and intellectual integrity.

Unfortunately for D&G, posting that apology was equivalent to putting a band-aid on a gushing wound. Photos of D&G clothing piled on “clearance” racks all over the world are circulating the internet, and more stores around Asia are set to close in 2019. Many are saying that the founders have lost control of the situation, and the prospect of Stefano Gabbana stepping down from the iconic duet brand is speculated by many outlets.

This was not the first time Dolce & Gabbana found itself in the center of a scandal. But never before has the fashion brand suffered such grand consequences as a result of an offensive promotional campaign.

One could hope it will also be the last one, with other brands taking away a lesson from this story, and reputable accounts like Diet Prada keeping brands in check. Only a few years ago such a campaign would have been dismissed as “a bad joke”. So what brought the fashion industry to become so “#woke”?

A major reason is of course the growing influence of China as the biggest customer base. This was certainly a very expensive misjudgement for D&G: China alone makes up for 30% of luxury brand consumption. Designer brands are making big bucks off Asian consumers –  in the last decade more luxury stores have opened across Asia than anywhere else in the world.

Ever since the scandal, the Italian fashion house has been noticeably careful in terms of public perception: Their January fashion show in Milan was all about classic elegance and hardly provided any points to attack. Meanwhile D&G stays widely frozen out of the Chinese market, Business of Fashion reports. Some journalists went as far as asking if Dolce & Gabbana will even be able to survive the China debacle.

It probably will. But the saying goes “Forgive, but don’t forget.” There is still a major open question to be answered: What will the fashion community do with Stefano Gabbana? The co-founder is notorious for his inappropriate comments on social media, and this is just one of the numerous leaks that got him in trouble with the fashion community over the years. Whether this is the end of the D&G era only time can tell, but this scandal was definitely a turning point for the company – and maybe even the fashion industry as a whole.