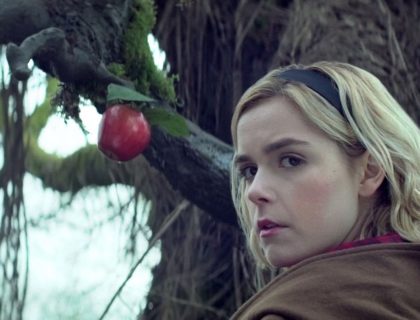 Who is ready for wintertime?
We are all slowly wearing more and going out less: lighted candles, cozy blankets, and hot tea are essentials that will help us get through the cold season. The only thing missing is a matching TV show – but no worries, we got you!

Chilling Adventures of Sabrina is a new American supernatural horror TV Series on Netflix, that was released on the 26th of October and has received a wide range of positive reviews.
The main character, Sabrina Spellman, who is portrayed by the American actress Kiernan Shipka, is a half-witch that has to choose between the path of darkness and the path of light. This means that she has to choose between pledging loyalty to the Dark Lord Satan to join the witch’s circle of her family, thereby gaining power, while keeping her freedom by choosing to live a normal life with her mortal friends from high school.

The story is based on a comic book series for children with the same title – but here’s why this new show is must-watch for adults:

There are a lot of scenes pointing out everyday-situations of abuse against women – and the good news is, the women are fighting back. For example, let’s start with the fact that Sabrina forms a club with her mortal female friends from high school to stand for equality. And besides that, she’s plotting revenge with other witches against a group of boys that are constantly harassing other girls. Considering that throughout the whole storyline she is trying to compete against the Dark Lord Satan himself, this is a good metaphor for the fight of many feminists these days against the patriarchy. This dialogue of Sabrina and another teenage witch illustrates her conflict of choosing the right side:

And feminism is not the only current topic that is involved in this TV series: racism and pansexuality, for example, are made a subject of discussion, too.

Whether you’re thick-skinned or not – this one will definitely give you chills. Evil witches, demons, vampires, hexing ghosts of little children and of course the devil himself – the range of dark creatures that Sabrina has to face has no limits. Things are getting creepy at the highest level! And one thing is promised: even if you usually don’t like scary movies, this TV show will put a spell on you with it’s fascinating atmosphere.

While being delightfully entertained, the storyline also contains important lessons that we can all learn from:
We learn, for example, how important friendships and family members are to overcome struggles and to stay strong in the battle against darkness. Because in the end, it all comes down to who’s got your back.

We also learn that questioning authorities and breaking traditions is sometimes necessary – and it requires courage. Simply by listening to your heart and trusting your intuition, you’re able to make a change.

Who would have guessed that dark witches and wizards could be fashion role models? During the entire show, they serve iconic looks wearing classic shaped old-fashioned clothes in earth tones with a wild mix of patterns – it makes you want to go vintage shopping in second-hand shops.

In case you need a break from your stressful daily routine, this TV show is just the thing. Plunge into another world filled with magical creatures, dark spells, and charming witches… the sky is the limit as far as imagination goes. And beware: there’s a high chance of being casted a spell over by adorable twisted characters such as Sabrina’s vicious yet protective Aunties or her witty and kindhearted cousin, who has an aura of dark beauty. You’ll witness Sabrina’s chilling adventures as if they were your own – it will bring a little magic into your world!