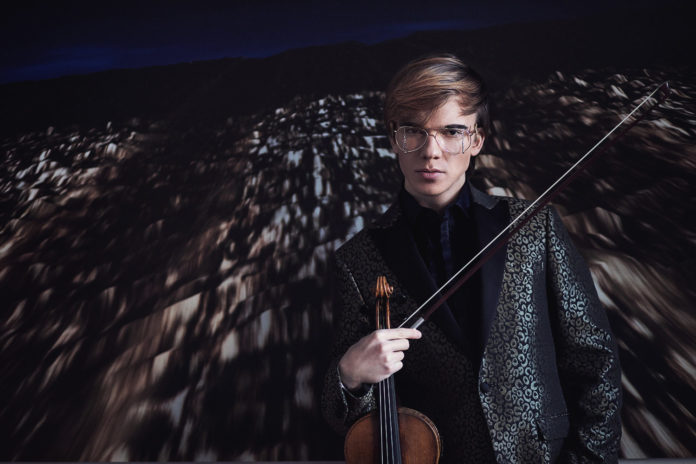 The Moscow-born, Vienna and London-based Violinist Yury Revich is somewhat the wunderkind of today’s classical music. Named “Virtuosi of the 21st century”, he has been guest starring on all the major stages of the globe, such as the London Carnegie Hall over the Scala in Milan to the Metropolitan Hall in Tokyo. In 2015, Revich started Friday Nights with Yury Revich, a row of “concerts of the arts, a concept that has been reshaping the idea and perspective on classical art and music.

What was the reason to start Friday Nights with Yury Revich?
The reason behind it was to break a bit the limits of a very conservative standard and a very classical music and to bring it to a new level of creativity with different combinations of art; music plus fashion plus art plus dance plus the sense of experience.

Where does your interest in other fields of art come from?
I was painting a lot when I was a child and my mom also took me to dance classes, which I did not like in the beginning. I was always interested in arts, fashion and writing. That is why I thought of bringing all these things together. And of course I also like to write and to shoot short films, so there is also the theatrical part of me.

Why are you so interested in supporting young artists?
Because I am young myself, I appreciate how uneasy it can be sometimes for others.

It is a very dense and filled industry and every person that comes seems to be kicking out another person.
Yes, sure, but they did not kick me out yet, so it is fine.  (laughs)

Where do you see the need for the government to support classic art?
Literally everywhere. When we start with finances, for example, the government usually funds the big, enormous productions which is a huge amount of money and for the small ones they have a few hundred to spare. That does not make any sense for the production of the event which involves many different fields.

All over Europe, the governments are insufficiently supporting classical music, how do artists survive?
Good questions (laughs). They play gigs and try to get as much exposure as possible.

Why do people choose to stay in Vienna?
I finished my studies here and I liked it.

Is there any other place you would like to go?
London, which is now my second base next to Vienna.

I have the feeling that there is a certain Russian Renaissance when it comes to classic arts, where do you think it is coming from?
It has always been appreciated I believe, but maybe now certain composers get more exposure internationally.

How is the art scene in Moscow?
Actually, it is cool. The great thing is, that there are a lot of young people that go to concerts; true classical music became trendy. Young people like to bring their partners for a date, to drink; it is really in fashion.

How is the support of classic art in Russia?
It is actually good, and the government supports also small institutions and towns for example in Siberian cities.

Could you imagine being an ambassador for classic Russian art?
I think I am anyways, like many other Russian born artists who live abroad, as we perform a lot of Russian music and do a lot of things to promote it internationally.

How do you think the interest for young people to appreciate classic art can come back again?
I think it is the ticket price policy for example because many events here are keeping classical music among the elite. For example, not every student can afford a few hundred euros for the Opera if the other tickets are not available. Of course, there are standing places, which are sold out quickly. What Friday Nights with Yury Revich can offer is more affordable prices for higher quality than many other organizers in Vienna.

Where does your personal love for classic art come from?
I am the 4th generation of in my family of Violinist, I loved it from the beginning up to today.

Did you ever imagine doing something else?
No, but I have many different hobbies. Maybe I would be a filmmaker, but that might happen in the future.

What kind of movies?
At the moment I have 3 short films, 2 of them are online which I filmed myself and I took part in several others and of course, I have scripts for many full-length movies, but that takes a lot of time and budget to realize.

Where does your interest for Fashion come from?
I have it since I am born. It came out when I started to perform. I was looking for my own identity in terms of how I dress on stage because I was bored of wearing the same black things all the time. So I started to go out and observe and when travelling, I saw how other people dressed. Milan, for example, inspired me a lot. I am a very visual person so I like to visualize everything. Observing people more and more I wanted to involve it into Friday Nights with Yury Revich, because Fashion is an art form and we aim to work with all art forms.

How do you balance your performances with the one of the others?
I definitely do not want to do Friday Nights with Yury Revich just by myself so that’s why I invite other artists to take part.

What was your favourite Friday Nights with Yury Revich?
There are several. For me, our Charity Galas are very important.

You support a lot of Charities, don’t you?
Yes, of course. To me, it is very important. I believe as musicians or other public people, we have to do anything we can do to help.

What support did you get when you started out as a musician?
My parents, of course, my father is my teacher. It was a lot of moral support from my parents. When I started to get a lot of support in Moscow I moved to Vienna, so I had to start all over again. When I was 17, I had to leave the support I had in Moscow and start building myself up here, but people here are very nice and friendly.

What is your next step to grow bigger?
Doing everything I am doing so far but bigger (laughs)

Any place you have not played yet?
Many of course, I have not been to Australia yet, which I would love to.

How do you explain that you got famous so fast in Austria?
I really don’t know… Maybe we should ask the people on the streets. I think in order to get established in classical music it takes a lot of efforts and I always make fun of my colleagues who are a little bit arrogant and they think they are so famous. If then you ask people in the metro, they most likely don’t know them.

How is it possible to break the elitism of classical music?
By dropping the ticket prices. As a student, I could not afford to go to the opera often. Also, a focus on commercial advertising and more young musicians as brand ambassadors can help.

Where do you want to go with Friday Nights?
We are the best in Vienna, but we want to become the major “Concerts of Arts” in Europe. We aim to do international tours, which we tried out successfully in Athens.

The next Friday Night with Yury Revich, Mother Earth, will take place on Friday, the 18th of May. Check your tickets here.