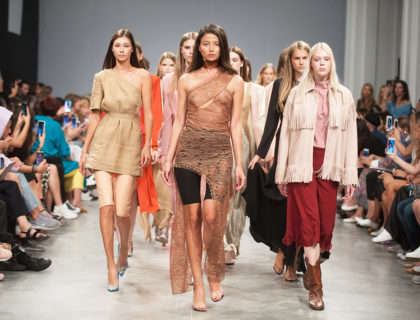 The season of the Fashion Weeks is already launched all over the world. Designers impress with their unique visions and concepts. However, as usual, there is one common idea among all of them that can be clearly seen and emphasized.

This year Ukrainian designers were concentrated on the clothes that reflect the power of female sexuality and confidence. There were a lot of dresses with animal prints, extra minimal length, and tight silhouettes. So, let us inform you about the trendiest trends of this seasons regarding Ukrainian designers.

Extra shoulders from the 80s’

One of the fav elements in the majority of the collections.  Dresses, blouses, jackets were structured with extra shoulders. This trick looks really gorgeous. Somehow it adds some posh and fancy effect. Moreover, the dresses that seemed to be pretty simple because of the tight silhouettes and mini length immediately turned into the pieces of art, because these extra shoulders created the wow effect. The clothes that were decorated with massive shoulders was extraordinary and interesting for the contemplations during the shows.

All you need is a jacket

There was no single collection without spectacular but at the same time strict and kind of official jackets. They add women the energy of power and independence. The audience could see over-sized jackets, as well as fitted ones. Anyway, both of these models were quite massive and played the central role of every outfit that appeared on the catwalk.

Animalistic is a new black

Different sorts of the garment were overwhelmed with animalistic prints. God blessed, in a good sense. This trend was that one that stands for the sexuality and extra confidence. Not every woman can be that much provocative as to wear the dresses with such art of print in the everyday life. It seems that through the animal element in the collections the designers aim to nudge women to let their wild souls and feelings out.