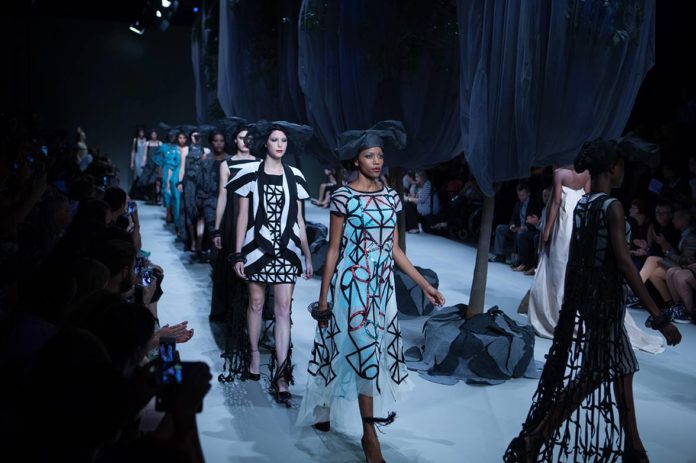 Over the last decades, fashion in South Africa has been flourishing and becoming more and more prominent on the global spectrum. From urban, unisex designers to impeccable evening wear, South Africa and its Fashion Week has established itself as a key player of the African Fashion Industry.

The Ready-to-Wear and Couture designer Geert-Johan Coetzee launched his label in 2010 at the age of only 22. Ever since, he has become known for his outstanding red-carpet gowns, worn by stars such as Bonang Matheba, Rolene Strauss and Kristen Cavallari. He uses his presence in media to support aspiring and emerging designers in South Africa and internationally.

The Cape Town-based fashion label Selfi is known for it’s ethically and qualitative designs. The name is set to inspire it’s customers to self-empowerment and betterment, raising the councsiousness about what and how oneself is wearing clothes. Together with South African creatives, annual collaborations are created and sold in the Cape Town Concept Store.

David Tlale is another one of South Africa’s long-lasting stars in the Fashion Industry. For over 15 years, he has established himself more and more as the representative of South African fashion on the international catwalks. Famous for his unpredictability, elegant silhouettes and embodiment of South African culture in his designs, he was the first South African designer to showcase at New York Fashion Week in 2012. Through his immense media coverage and the constant interest of the audience, he also supports upcoming and emerging designers.

Black Coffee stands for sharp structural designs, exacting geometry and echoing African motifs by combining them with contemporary fabrics and cuts.With a love for geometrical patterns and cuts, designer Jacques van der Watt focuses on high-quality materials and an artistic approach towards his designs.

Prior to starting her own clothing label, Amanda Laird Cherry has been turning heads while designing for different South African Fashion Brands. With her own collection, that merges traditional elements with timeless designs she has been showecasing all around the world. This label, as much as the woman behind it herself, definitely cannot be missed on this list.