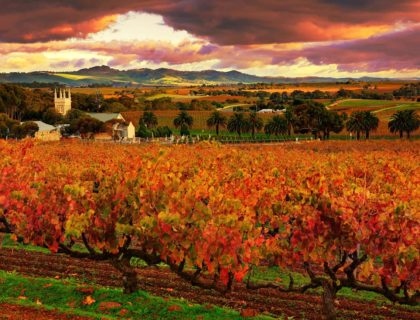 On my previous wine blog, I share my tips on how I discover rare gems for good value when I blindly travel around the world of wine, highlighting the wine region as a major point of reference.

While wine has been described as a window into places, cultures and times, geographers have realised that the same grape grown in different geographic regions produced wine with differing taste characteristics.

When you know what wines are suitable for your palate, you may want to spend a little time researching the regions in which your preferred varietals are produced because the climate of individual regions has the greatest influence on the wine style. However if you are new to wines and feeling a bit confused or intimidated when faced with a myriad of choices as you try to figure out which wine works for you, I would like to take this opportunity to influence your wine choices based on my top 5 wine regions and what grape varieties they are best known to produce.

A great source I came across that provides a deeper understanding of the influences that geography can play on wine production is the book “Geography of wine,’ edited by Dougherty, Percy H. (Ed.). This book discusses the impact of an area’s geography on its wine production as well as how geographers study wine production while featuring an analysis of the regions in which grapes and wines are produced.

The perception of the quality of any wine is inevitably influenced by your individual palate. Just because the top 3 major wine regions of the world (France, Italy, and Spain) produce almost half of all the wine produced in the world enough to fill 5,127 Olympic-sized swimming pools, your wine exploration should not just stop there. As long as you keep an open palate and appetite to experience more far beyond, the world of wine is here for your enjoyment.

Here are my top 5 regions that quench my wine-loving thirst and happen to rank among the top ten leading wine exporters.

My wine love affair begun right here in South Africa where my wine journey officially begun, where the Cape winelands stretch from the rugged mountains and multi-directional slopes of the coastal region to the open plains of the Klein Karoo where viticulture takes place mainly in the riverine valleys. South Africa’s vineyards are mostly situated in the Western Cape near the coast. Travel over the mountains into the hinterland and the rainfall decreases dramatically with the vegetation dominated by hardy succulents, cycads and aloes.

Just as the wildlife industry has the Big Five, the South African wine industry boasts the Big Six, which refers to the cultivars: Pinotage, Shiraz, Cabernet Sauvignon, Merlot, Chardonnay and Sauvignon Blanc. On my entry into the wine market as winepreneur, Liz Ogumbo Wines, I released a 71% Chenin Blanc/ 29% Chardonnay blend 2017 named ‘Msenangu’ and a Pinotage 2013 named Mon Homme to pay homage to my love affair with the South African wine industry.

Moving forward, as I continue to explore South African wines as a wine consumer and winepreneur, I am also working towards more wine releases in collaboration with key winemakers in the wine industry to highlight more varieties including a personal favourite of dark fruit, cedar and spicy notes brought to life by the cabernet Sauvignon which is the most widely planted red grape in South Africa.

Moving on to another one of my favourite red wine regions, the key to unlocking the potential of Australia’s wines is understanding the geographical distinction of its vineyards. The five most important wine states in Australia are: Western Australia, South Australia, Victoria, New South Wales, and Tasmania.

A tremendously versatile grape variety, Syrah (originally called Shiraz) from the Barossa Valley in South Australia produces a full-bodied Shiraz with jammy fruit and a hint of spice. As Barossa wine producer Peter Lehmann says, ‘When God invented shiraz, he did it with Australia in mind.‘

Another Australian fave in my world of wine is the Cabernet Sauvignon which has a long history in Australia dating back to the mid 1800s. Balancing the dark, rich fruit with flavours of mint and eucalyptus while bringing forth a beautiful balance of fruit, acidity and tannin, the cabernet sauvignon can age gracefully for decades and is a feature in many of Australia’s most historic and successful wines.

Australia successfully grows a range of other grapes including Grenache, Mourvèdre, and pinot noir in reds; chardonnay, Riesling, sauvignon blanc and Semillon in whites. Interestingly enough, their wines are often labelled with the name of their grape variety, which must constitute at least 85 percent of the wine.

Somehow I never made it to Chile in the past world physically yet, but thank God I am still able to experience Chilean wines in reality while allowing myself to virtually discover its wine valley. While I was away in Brazil for the Carnival in Feb this year, I discovered another Chilean gem which has become an addition to my favourite wines so far.

Considered the national grape of Chile, Carménère, known as the ‘lost varietal’ of Bordeaux is a dark-skinned grape variety originally from the vineyards of Bordeaux containing higher levels of aroma compounds called pyrazines, which give wines subtle flavours of bell pepper, green peppercorn, eucalyptus, and even cocoa powder. This variety has found a particularly suitable home in Chile where it celebrates celebrate 22 years as an officially recognised variety in Chile this year.

Another variety you may enjoy from the Chile section of wine wherever you are is the Cabernet Sauvignon which is the most widely planted variety in the country. Many of the most famous Chilean wines over the past twenty to thirty years have been Cabernet Sauvignon or Bordeaux blends, especially from the Maipo Valley, just south of Santiago. Other Chilean major grapes also include Chardonnay, Merlot and Sauvignon Blanc

As we move east to the bordering Argentina which continues to grow its wine production year after year resulting in the highest growth rate (8%) of the top 5 wine producers in the world, I just cannot get enough of that Malbec.

Originally a Bordeaux grape variety that now makes up about half of Argentina’s wine exports, Argentina’s most highly rated Malbec wines originate from Mendoza’s high altitude wine regions of Luján de Cuyo and the Uco Valley located in the foothills of the Andes mountains between 800 m and 1500 m elevation. Malbec is often dark, higher in alcohol, fruity and smooth and pairs well with leaner red meats.

The great Cabernet Sauvignon is another great choice from this wine region. Other major grapes from this region also include Bonarda and Chardonnay.

If you like a good Malbec, here is a hint.

Stony and rather poor terrains like Portugal’s Douro River banks are the best ones for vineyards because vines are forced to search for nourishment deep in the soil, with the resultant wine gaining complexity and structure as have shown. The Douro wine region stretches along the river’s course from Portugal’s border with Spain to the small town of Mesão Frio, in the province of Vila Real. It’s a landscape of steep slopes of schist and granite that put grapevines to the test, because their roots sometimes have to sink deeper than 50 feet (16 meters) to find nourishment.

Whenever I visit Portugal or any Portugal wine section around the world, I look forward to a Duoro Valley Porto which is a high alcohol dessert wine from northern Portugal made by blending several grape varieties for the best. However, other major grape varieties produced inthe valley also include Tinta Roriz (Tempranillo), Touriga Franca, Castelão, Touriga Nacional, Alicante Bouschet, Alvarinho and Arinto.

If you are yet to experience good wines in the winelands, it’s never too late. While we sit still in lockdown pondering our minds in anticipation of when we will be able to enjoy our travel pleasures and privileges again, you still have an opportunity to begin your experience virtually. The next time you are wine shopping, stop at the any of these regions sections in the shop, take a chance on some bottles, get home, get on youtube and let yourself experience the wine beyond your glass.

Wine is an experience! Take some time to find out the origins and regions where you can discover more about everything you love about your favourite wines while you drink responsibly.