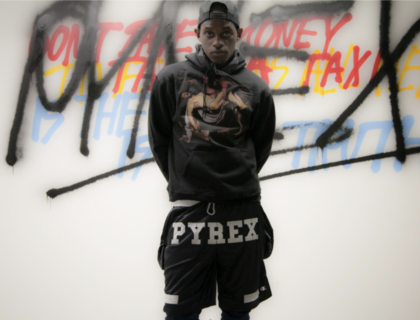 Virgil Abloh probably is Americas most progressive designer and owner of the successful label OFF-White. With his unique approach and unapologetic visions, he has made it to becoming Head Designer of Louis Vuitton this year. But, do you know what anteceded his current fashion trademark?

His first brand – Pyrex that was founded in 2012. For one of its collections, Virgil used the shirts of Ralph Lauren. He slapped on them the name of his first label and sold them on the Internet for 550$. In the interview with Hans-Ulrich Obrist, the artistic director at the Serpentine Galleries, London, Virgil explained his main message that was sent through those shirts. He said that the purpose was to turn already produced (readymade) shirts into pieces of art.

The culture of readymades appeared in 20-s. Its first representative and, actually, the founder was French artist Marcel Duchamp. His masterpiece “Fountain” is famous all over the world. “Fountain” is an example of Dadaism that denied all established norms of thinking and rational perception of the things that surround us. Duchamp replaced the conventional meaning of the toilet with his own vision of this thing. He turned a simple toilet into “Fountain”; he challenged rationality and cultural standards.

Coming back to Abloh, he grew up in 90ies in America, he was totally absorbed with the culture of skateboarding, Rock’n’Roll and Rap and started early with DJing. Street lifestyle was Abloh’s philosophy. However, his father saw him as an engineer. Virgil listened to him and his education path was started.  “I took an art history class in my fifth year of engineering. I learned about the Italian Renaissance and Caravaggio, and it rewired my brain”.

Abloh printed Caravaggio on the front and ‘Pyrex 23’ on the back. ‘Pyrex 23’ is a title of a poem about the difficulties of living in the US streets. Two things can simplify your life in a hood: a cool game of basketball, 23 – the number of Michael Jordan, or Pyrex – cookware for cocaine crack.

So Pyrex 23 shirts are the examples of the readymade culture in the modern fashion industry. Abloh denied their initial value and replaced it with his vision, message and history.