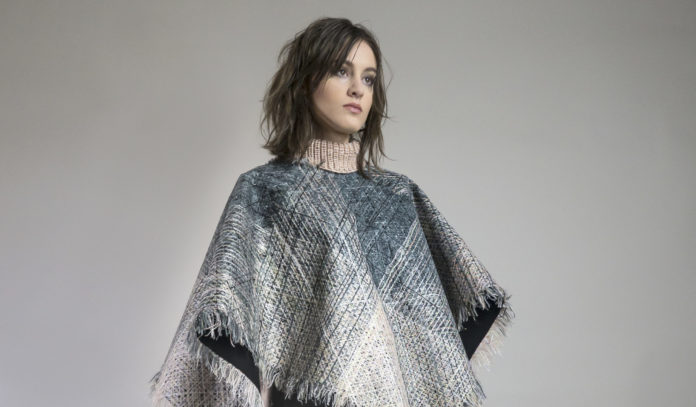 Hellen van Rees is a fashion and textile designer based in the east of the Netherlands. After completing a BA in Fashion Design at ArtEZ, Arnhem and an MA Fashion Womenswear at Central Saint Martins in London in 2012, she started her own label. Hellen focuses on innovative crafts, new textiles, sustainability and since recently also wearable electronics.

One of Hellen van Rees’ newest projects, a preview:
In association with Angelika Mader (University of Twente, The Netherlands) and Geke Ludden (University of Twente, The Netherlands), Hellen van Rees developed the Textile Reflexes prototype. This is a fascinating hi-tech robot vest for posture correction, one of the latest developments in wearable technology and innovative textiles.  Could this be a glimpse into the future of sustainable fashion?

Hellen’s interest in fashion stems from the techniques and processes involved in creating it.  She doesn’t have a muse or role model, but the combination of sketching, working with textiles, creating patterns and remarkable images have been her inspiration.

Hellen van Rees has been known to find her inspiration everywhere she looks, from an interesting stone on the pavement to contemporary art installations or historic costumes. Then the creative process starts and that’s generally the most challenging; trying, failing, even seeing new possibilities in some failures…

It’s a strong, independent woman who wears Hellen van Rees main line, mostly business women or women entrepreneurs. Her garments are in a traditional silhouette but with experimental textiles, so they suit a work environment – but are far from standard.  They require a confident personality.

She’s not such a believer in seasonal trends.  Hellen doesn’t design seasonal collections but has one main collection to which she gradually adds and discards.  Hellen accepts there are more major trends, those guided by economy, politics, events, arts, science etc, that influence a feeling of the time and tendencies.  However, she feels these should not be limited by the restrictions of being in SS18 or FW18 for example. She keeps a library of images that continually inspire her work and to which she gradually adds and discards, just like in the collection.

It’s a dream of Hellen van Rees to be able to continue with research-based design and grow her team and therefore spend more time on the actual creative process. She is full of energy and open minded for exciting fashion challenges in the future.

Hellen hopes more people will start to consume consciously, mind what they buy and buy more from small independent businesses instead of from large global brands. She thinks this way we’ll also see a more interesting image on the street, more diversity in style and more diversity in stores.