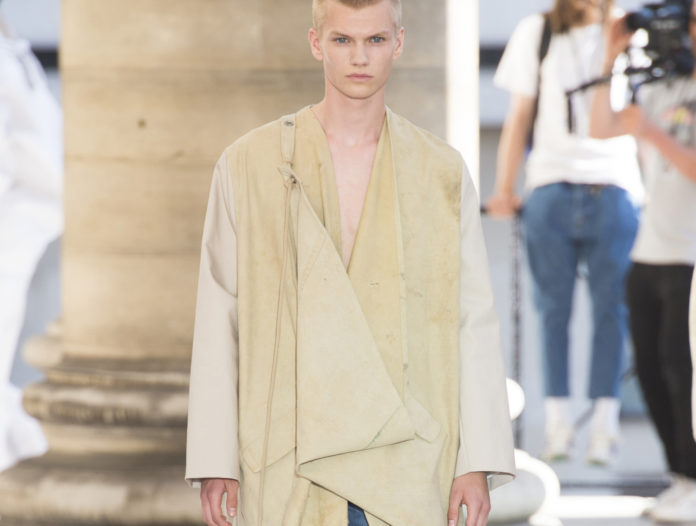 “Growing up in a small village located in the North of Israel near the Lebanese border, Hed Mayner started sewing from the age of 16, making his own patterns and garments.He later studied at the Bezalel Academy of Arts and Design on the West Bank ofJerusalem, before moving to Paris where he enrolled at the prestigious Institut Français de la Mode. Living in the French capital allowed him to discover new aspects of fashion and style, as well as hone his design skills and enrich his own aesthetics.

Now in his late 20s, Mayner advocates a timeless and unfussy approach to design,using natural fibers and refined fabrications, as well as a layered silhouette fittingdifferent climates and contexts. The cultural richness of Israel, combining 70 different cultures in one single land, also gives Mayner the creative distance he needs to explorenew fashion ideas. His fascination for “poor” tailoring and utilitarian clothes is fusedwith the religious and the non-religious, the local and the global. Imagining a fresh form of luxury which gets closer to truth as opposed to sophistication, he’s inspired by life in Tel Aviv and the dignified elegance of men surrounding him.

Hasidic motifs pop-up within the line, as well as rectangular volumes, which give aminimal and airy vibe to his clothes. The color palette is always neutral, hovering between pure andraw white to solid black, as well as beige, khaki and gray. Body language is key for Hed Mayner. The attitude of his guy is confident, but never imposing. Leaving enough freedom to the wearer to take his own stance, he creates unusual garments, which have a realistic and pragmatic depth. Balancing thick and fluid, stiff and soft, hard and gentle, he underlines the importance of his own craft, as well as an inspired take on menswear staples.”

See all of our favourite lookbooks here.